People that follows Souliss blog from long time probably know about a working idea that started with Marco Signorini from Ethermania. It came up as an Arduino based RS-485 board and moved to the design of a power+data bus at 24V, most of it is documented on this topic of the Arduino forum.

There was a lot of work out of the topic, we get a final design but end up that was too similar to commercial project and quite risky, so after some time we moved back to the old idea of RS-485 with the idea to make the board even simpler.

One of the challenging is using an RS-485 connection with Souliss, because that standard came up at time of master/slave communication and electrically an RS-485 driven doesn’t allow a peer-to-peer communication, because doesn’t allow a listen back for collision detection. At time of the first Ethernet (10-BASE2), it was basically a modified RS-485 for collision detection with a dedicated transceiver, this is now no longer supported in common transceiver. So, we get inspired by uLAN and we are start to design a collision avoidance driver that will run into vNet, in the top image there is the first run between two boards. 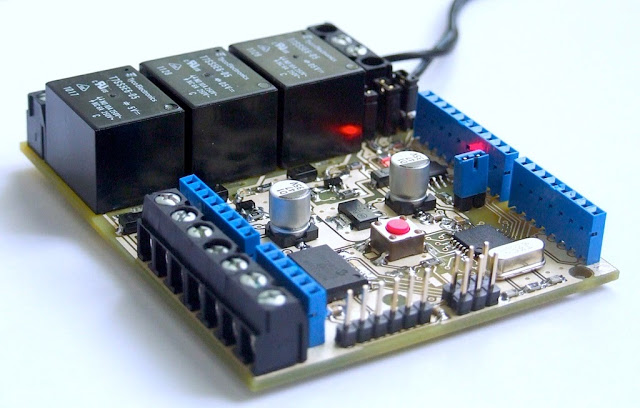 The plan is to design three boards based on RS-485, all based on ATmega328 with the followings: A relay board, with three (3) relay and direct contact inputs (just wire the standard wall push-button in); A LED board, with 8 or 12 channels (based on space) and direct contact inputs; An input board, just with inputs. Thanks to vNet, this boards can join the Souliss network throught a bridge that will be based on a classic Ethernet board with a RS-485 shield, where one or more bridging can be used according to the topology of the network and number of nodes.

Is still a big question mark and we are just at the begin, finger crossed!